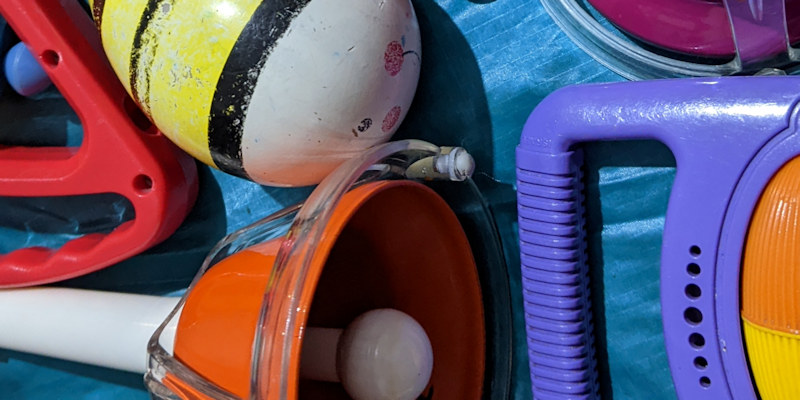 Rucksack Music Inc. began in June 1997 when I had attended a rather badly organised music group with the children whom I used to mind. I decided that my teacher training should be put to some good use – so asked the local church curate if I could hire space in her church.

The ethos of the group has evolved over time but in the main it is about getting parents and carers to just enjoy singing and bashing instruments with their children – keeping away from soft, subtle, quiet baby music (more appropriate for the home when you want to soothe) and just having fun and noisy “organised” chaos. I wanted everyone to be relaxed and to enjoy themselves – not stressing if their child was up and wandering around (as long as the whole group was not up and wandering around!); and because the children are so young, I did not want them to feel pinned down – not being allowed to move around or to even just dance in the middle. There is nothing more gratifying than seeing the children just bashing and swaying or stomping in the middle of the crowd.

The groups are run as drop-in’s, as I too have had the annoyance of losing pre-paid fees when one of the kids was unable to attend – or pooey nappies; lost shoes or other last-minute delays prevented me from getting everyone to the group in good time. I also wanted people to “want” to be at the group and not be there because they had paid for 10 sessions. I feel that if the adults or the children are just “not in the mood” – they should take a break and come to the groups when they feel like it.

From January 2007 I am leaving London to move to the Isle of Man (hence the Isle of Man reference at the top of the home page). After running this company for 9-1/2 years, my family and I are making this rather monumental move and I am placing the company into the very capable hands of three, lovely, women.

Caroline has been with Rucksack since 2000 or so, running groups in North Finchley and covering for other members of the team when any of us have been away or poorly. Caroline has a wonderful sense of fun and her infectious love for music (especially songs from other nations) comes across in all the sessions that she runs. She is taking over my sessions in N1, N16 and E5 and I know will fill my shoes to overflowing.

Cathy has become associated with Rucksack in an “ad-hoc” way, running groups for us when folk are on leave and generally becoming a real asset to the team. In the Summer of 06 Cathy started her own groups and now runs them in Blackheath and Lee. Her warm, sensitive personality is a wonderful asset to the team.

All of Rucksack Music’s groups are different, even when run by the same group leader, and change on a weekly basis depending heavily on the “mood” of the folk who attend. New group leaders are, to a certain extent, cutting their teeth and will develop their skills as they move through the term and year. I learn new things all the time and I have been running groups for over 9 years. Guitar and singing skills (especially the strength of the voice) develop with time and as each group gets to know their leader, they will assimilate with their style. We hope that you and your child enjoy the groups and that when you leave you are feeling fulfilled by the experience. If you aren’t, try different group leaders; another person might just “hit the spot!”

The groups are run in a structured way so that the parents and the children know what is going to happen each session. I find this leads to less confusion and gives the children more confidence as their familiarity grows. The repertoire is huge and we try to introduce 2 or 3 songs every term – so that it keeps growing. New songs are constantly being searched for – so suggestions are always welcome.

We have a 10-minute break at about 40 minutes past the hour – where all the instruments and books are put away and the biscuits come out. The children play and the adult’s gossip and then, when we have cleared up – we do some stand up songs to finish off. We always finish the session with the Hokey Cokey – so do save some energy for the last song!

Rucksack Music is meant to be fun. It is not meant as a serious music lesson and the emphasis is on enjoyment; socialising (especially for new babies and mums) getting to know lots of songs to sing with your child(ren) in the bath, in the car, anywhere you can and most importantly – it’s there for people to just sing, bash and holler to their hearts content. Peace and quiet is not the order of the day!!

On a personal note, I will miss all of the adults and children who have attended my groups. Whole families have attended over the years (some with three and four children) and one day I hope to have children come to me, borne to children who used to attend. I LOVE my job! You have made that happen and I cannot be more grateful than I am to all of you.

By the way – the name Rucksack Music came from the fact that I used to carry everything around for the group in a rather old and battered looking rucksack from my student days – and it just seemed appropriate. 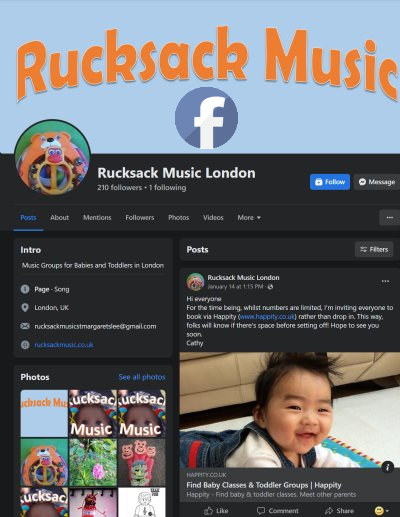